The habitable zone is a region around a star where a planet can have surface temperatures consistent with the presence of liquid water. All life on Earth requires liquid water, so the planetary surface temperature requirement appears to be a natural one. The climates of planets with thin atmospheres are dominated by external energy input from the host star, so that a habitable is based on distance from the host star. Small stars have habitable zones much closer to them as compared to Sun-like stars, owing to their lower luminosity. 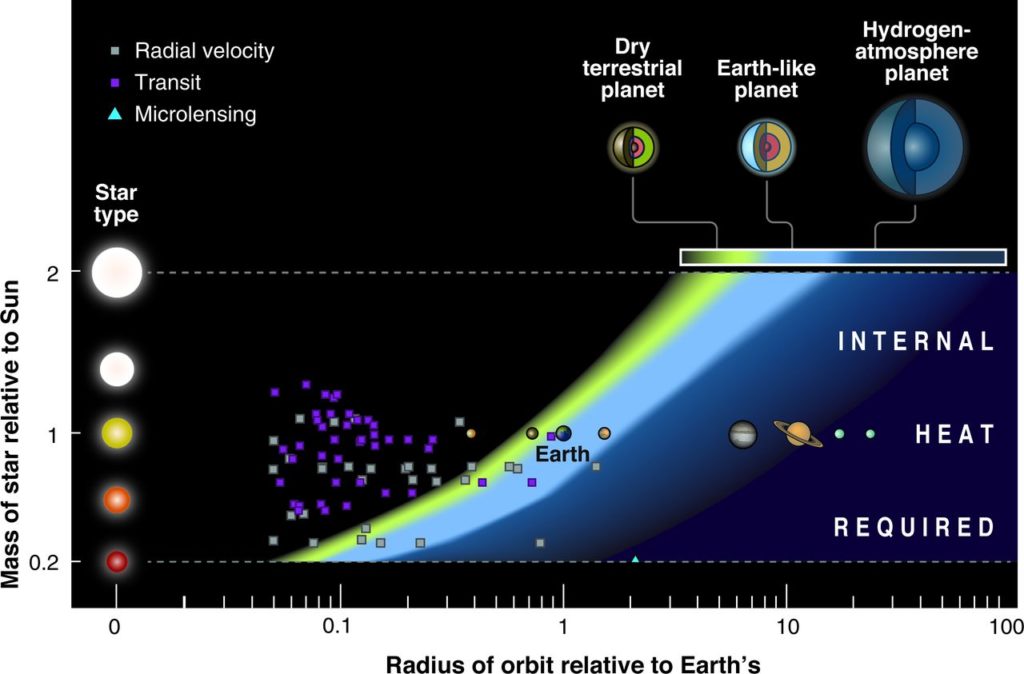 The surface temperature on an exoplanet is governed by the greenhouse gases (or lack thereof ). Specifically, the greenhouse gases absorb and reradiate energy from the host star, in the form of upwelling infrared (IR) radiation from the s surface. Whereas on Earth we are concerned with, e.g., parts-per-million rise in the greenhouse gas CO2 concentrations, for potentially habitable exoplanets we do not know a priori and cannot yet measure what gases are in the atmosphere even to the tens of percent level. The atmospheric mass and composition of any specific small exoplanet is not predictable.

The figure shows an extended habitable zone that captures some of the more modern thinking about habitable planets. The light blue region depicts habitable zone for planets with N2-CO2-H2O atmospheres. The yellow region shows the habitable zone as extended inward for dry planets, with little surface water and little water vapor in the atmosphere, as dry as 1% relative humidity. The outer darker blue region shows the outer extension of the habitable zone for hydrogen-rich atmospheres and can extend even out to free-floating planets with no host star. The solar system planets are shown with images. Known exoplanets are shown with symbols [here, planets with a mass or minimum mass less than 10 Earth masses or a radius less than 2.5 Earth radii.