Professor Seager aims to find Earth-like worlds. Space telescopes above the blurring effect of Earth’s atmosphere give us our best capability to find small rocky worlds. Professor Seager is involved in several space-based missions including as PI of ASTERIA (formerly ExoplanetSat), as Deputy Science Director of TESS, and as a scienficir leader of the Starshade project.

Professor Seager’s research group also works and has worked with data from several space telescopes including Kepler, Spitzer, Hubble, and EPOXI. Above the blurring effects of Earth’s atmosphere, space telescopes provide excellent observations of exoplanets and their host stars.

Professor Seager’s 6U CubeSat ASTERIA is being implemented at JPL. ASTERIA, formerly called ExoplanetSat, is motivated by the thought that no current mission has the capability to survey the nearest sun-like stars for an Earth analog. The best way to monitor the brightest sun-like stars (0 < V < 6) for long-duration transiting exoplanets is by a targeted star search; the brightest stars are too widely separated across the sky for a single telescope to continuously monitor. A fleet of dozens of identical ASTERIA spacecraft would be ideal to each monitor one star at a time, instead of a single space telescope surveying thousands of stars simultaneously. The detailed properties of each target star are well known in advance.

ASTERIA is a prototype nanosatellite capable of monitoring a single, bright, sun-like star. ASTERIA will have the precision pointing control (8 arcsecond (three sigma) ) and precision thermal stability (ten milli-Kelvin) to reach high photometric precision. To take advantage of CubeSat launch opportunities, ASTERIA as a 6U CubeSat (roughly 10 × 20 × 30 cm, 12 kg) that will operate in low-Earth orbit.

The ASTERIA project is a JPL-MIT collaboration. While the concept was conceived of and brought through TRL 5 at MIT and Draper Lab, the program is now funded at JPL through the Phaeton Program for training early career employees. JPL is responsible for overall project management, systems engineering, attitude determination and control, flight software, spacecraft implementation, integration and test, and mission operations. MIT will lead science operations. Flight hardware delivery is scheduled for March 2017, with launch and deployment targeted for summer 2017. 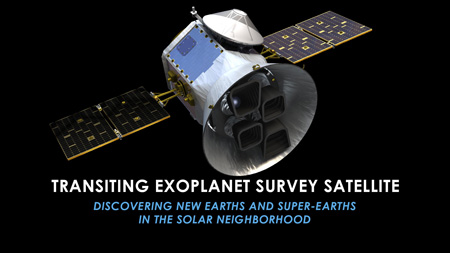 The MIT-led NASA Mission TESS is an all-sky survey for transiting exoplanets. TESS will carry four identical specialized wide-field CCD cameras, each covering 24 x 24 degrees on the sky with a 100-mm aperture. In a two-year all-sky survey of the solar neighborhood, TESS will cover 400 times as much sky as Kepler did. In the process, TESS will examine more than 0.5 million bright nearby stars and likely find thousands of exoplanets with orbital periods (i.e., years) up to about 50 days. TESS will not be able to detect true Earth analogs (that is, Earth-sized exoplanets in 365 day orbits about Sun-like stars), but it will be capable of finding Earth-sized and super Earth-sized exoplanets (defined as planets up to 1.75 times Earth’s size) transiting M stars, stars that are significantly smaller, cooler, and more common than our Sun. The TESS search for habitable planets that may be followed up for signs of life is, therefore, focused on M dwarf host stars.

The James Webb Space Telescope is a 6.5 m effective diameter aperture infrared telescope, with a launch scheduled for October 2018 on an Ariane 5 rocket from French Guiana. JWST will be the premier space-telescope observatory of the next decade, serving thousands of astronomers worldwide. It will study every phase in the history of our Universe, ranging from the first luminous glows after the Big Bang, to the formation of solar systems capable of supporting life on planets like Earth, to the evolution of our own Solar System. JWST is an international collaboration between NASA, the European Space Agency (ESA), and the Canadian Space Agency (CSA). The NASA Goddard Space Flight Center is managing the development effort. The main industrial partner is Northrop Grumman; the Space Telescope Science Institute will operate JWST after launch.

Professor Seager, and indeed most of the exoplanet atmosphere research community, is counting on the JWST for exquisite atmosphere observations of all kinds of transiting exoplanets. Of prime interest are the rocky worlds with thin atmospheres, transiting and in the habitable zones of “bright enough” M dwarf stars.

Starshade is a carefully shaped screen with its own spacecraft, which, when flown in formation with a space telescope along the line of sight to a star, blocks enough of the light from the star to reveal any orbiting planets. The starshade size and shape, and the starshade-telescope separation, are chosen to control diffraction around the screen and create a very deep and dark shadow; the planet light is unaffected due to its angular separation from the star. Creating shadows large enough for future space telescopes and deep enough to image Earthlike planets requires starshades that are tens of meters in diameter and separated from the telescope by tens of thousands of kilometers.

Use of a starshade to suppress starlight has several key strengths for discovering and characterizing nearby Earth analogs. First and foremost, because starlight is blocked before entering the telescope, no complicated optics are required, resulting in high throughput and allowing the use of any relatively small commercially available space telescope. This is in contrast to the lower throughput observatory and extremely specialized and difficult wavefront sensing and control system required for the internal coronagraph technique. Second, the inner working angle (iwa) of the starshade/telescope combination (the smallest angle on the sky at which an orbiting companion can be detected) is independent of telescope aperture. Rather, it is determined by the starshade size and separation from the telescope. Similarly, a starshade based observing system has no limiting outer working angle; the field of view is only limited by detector size.

A starshade-based starlight suppression system is, of course, not without its own challenges. The starshade must be manufactured to the required shape while meeting precise tolerances, the petal edges must be carefully designed to be small enough to minimize sunlight scatter into the telescope, the starshade must be deployed while meeting tight positioning requirements, the starshade must be precisely positioned and pointed during observation, and the basic optical response must be understood and proven. Nevertheless, while many of these challenges are new, the starshade structure has heritage from large radio antenna deployables and the JWST sunshield; and the fundamental engineering behind the structure and deployment is well understood.

Ongoing and Past Missions 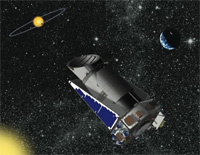 NASA’s Kepler Space Telescope completed its prime mission and is living on as the K2 Mission. During its prime mission, Kepler monitored 150,000 stars for nearly four years to search for a characteristic drop in brightness indicative of an Earth-sized planet. A huge amount of followup work confirmed and validated a large fraction of transit light curves as consistent with a planets. Kepler will provided statistical frequency of different kinds of planets orbiting different star types. Kepler fell short of its main mission goal of determining the frequency of Earth-size planets in Earth-like orbits about sun-like stars, and the exoplanet community continues to debate a value extrapolated from larger and shorter-period planets than the true Earth analog.

Professor Seager was a participating scientist member of the Kepler team and her group analyzed Kepler data of Jupiter-size and Neptune-size planets, focusing on their radii, albedo constraints from secondary eclipse, statistical properties, and any possible interpretation of physical characteristics. 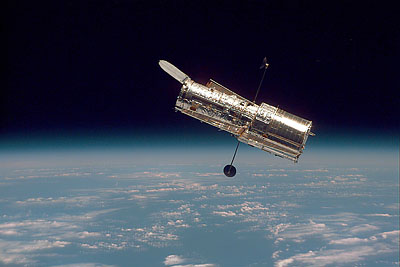 NASA’s Hubble and Spitzer Space Telescope provide observations of transiting planets, planets that go in front of and behind their star as seen from Earth. Observations of transiting planets exploit separation of photons in time, rather than in space. That is, observations are made in the combined light of the planet-star system. Primary and secondary eclipses enable high-contrast measurements because the precise on/off nature of the transit and secondary eclipse events provide an intrinsic calibration reference. This is one reason why the Hubble Space Telescope and the Spitzer Space Telescope have been so successful in measuring high-contrast transit signals that were not considered in their designs.

Members of Professor Seager’s research group analyze data from Hubble and spitzer and interpret the data to understand the composition and temperature of exoplanet atmospheres.

NASA’s Hubble and Spitzer Space Telescope provide observations of transiting planets, planets that go in front of and behind their star as seen from Earth. Spitzer operates at infrared wavelengths.

Members of Professor Seager’s research group analyze data from Spitzer and interpret the data to understand the composition and temperature of exoplanet atmospheres.

NASA’s EPOXI is a 30 cm telescope now orbiting the sun millions of miles from Earth. EPOXI is a combination of the names for a space mission’s two components: the Extrasolar Planet Observations and Characterization (EPOCh), and the flyby of comet Hartley 2, called the Deep Impact Extended Investigation (DIXI). Professor Seager was a member of a team that used EPOXI to study stars with transiting planets and also to observe Earth from afar. Professor Seager’s group is trying to understand what we would learn about Earth as an exoplanet from EPOXI’s near infrared spectra of Earth. For a slightly different topic of inversion of EPOXI’s Earth orbital light curves to determine Earth’s physical characteristics, see the following paper by an EPOXI team member: